A History of Italian Innovation 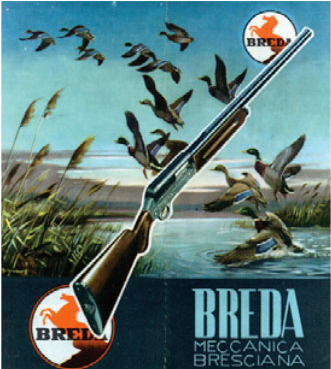 Although Breda is a relatively new brand to the United States, Breda of Italy’s long-standing tradition of making high quality firearms dates back to the mid 1920’s. Breda shotguns are famous throughout Italy and Europe because of their innovative design features, the quality of the materials used, and their pure aesthetic beauty. Breda shotguns are also known for the durability and simplicity of their inertia operating system.

Breda is a very old and established Italian manufacturing company that has produced a broad range of products, including, but not limited to, ship engines, thermal power plants, locomotives, and of course firearms during its illustrious history. Breda began making firearms in 1925. Quite naturally, it built machine guns and other military equipment for the Italian army. After World War II, the monolitic National Breda holding Breda was divided into several smaller and more manageable companies. Since then, Breda Meccanica Bresciana has been focused on the production of light arms, including, but not limited to, hunting and sporting shotguns.

At present, Breda shotguns are famous throughout Italy and Europe because of their innovative design features, the quality of the materials used, and their pure aesthetic beauty. Breda shotguns are also known for the durability and simplicity of their inertia operating system. Unlike any other semiautomatic shotgun on the market, Breda shotguns are handmade in small quantities with meticulous attention being given to every detail. For example, every Breda shotgun barrel is slowly drilled from a solid bar of tri-alloy steel. It takes approximately 50 minutes to drill the bore of just one barrel. Every rib of every barrel is hand fit before being hard soldered to the barrel using pure silver. Because of this attention to detail, it takes approximately 50 days to make a small batch of shotgun barrels. The receivers of Breda’s premium models are hand engraved by Diego Bonsi of B&B Incisioni and Bottega di Giovanelli. These are the same engravers contracted by manufacturers selling shotguns for many times the price.

Breda USA has brought Italian craftsmanship and innovation back to America. Breda’s most recent offering, the 930i Sporting, is the first inertia shotgun designed and built from the ground up as a clay target gun. The 930i Sporting is competition ready right out of the box. With an adjustable comb stock and Breda’s proprietary weighting system, shooters can customize the feel of their gun within minutes. Look for the full line up of Breda competition and hunting shotguns at a quality dealer near you.